You know sometimes we get these stupid forwards which are sent without thinking it over twice... I received one such forward -

What a blunder of a statement!

When you say 'Women weren't created to do everything a man can do. Women were created to do everything a man can not do' - you are assuming that people and the whole existence was created and there is a creator with consciousness - who planned it out that this is how a man will look and this is what he will do - this is how a woman will look and these will be her tasks - that assumption in itself is so idiotic that I do not need to explain it further. But I am still going to do that - Let us assume for a minute that there is a creator who had everything planned then you are assuming that a man was created first and the left-over tasks were assigned to a woman - Please tell me how was the man created in the first place if not from a woman's womb? - so let us rewrite the statement in a correct way (for fun as it still assumes that there is a creator) - a man was created by a woman to delegate things that she didn't want to do ;-)

Let's look at the next statement - 'Our generation is becoming so busy trying to prove that women can do what men can do that women are losing their uniqueness' - Women are not trying to prove that they can do what men can do, because it doesn't need to be proven! The second thing is why would anyone want to prove that they can do what a man can do? - you are posing it here as if men are doing something extraordinarily awesome that is completely out of reach of the other gender, well, you are not. Our generation of women is just rebellious enough to grab opportunities which were always rightfully ours- equally.

Differences in brain physiology between sexes do not necessarily relate to differences in intellect. Although men have bigger brain size which is partly explained by their bigger bodies, women have a greater cortical thickness, cortical complexity and cortical surface area (controlling for body size) which compensates for smaller brain size. If you were checking IQ test papers with no names on it then you wouldn't be able to tell the race, color, sexual orientation nor gender from the results. Two people can have the same IQ - irrespective of anything.

Also what kind of uniqueness are we talking about in the statement? that women can give birth? or are more emotional than men? Taking care of household things can not be an uniqueness because it needs two hands to take care of things and men who have hands should be able to take care of it too unless they lack brainpower to do simple mundane tasks like dishes or are physically so weak that they can not gather the energy to move around and take care of chores - that would explain their bulging paunch by the way!

People call me a 'feminist' and I hate the word feminist, just to make it clear - I am not a feminist - I love both sexes, in fact, men more so (I am a straight person after all and feel quite attracted to them, I have spent innumerable hours thinking about them ;-)), I am not a feminist, I am just an equalist. I never liked hearing men are better than women at anything and I don't want to do that disservice to the other sex.

But do I really think all the men are my equal? No. They are not. Some are better, some are equal and some are different (just being diplomatic).

Do I really think all the women are my equal? No. They are not. And the same logic as above applies. 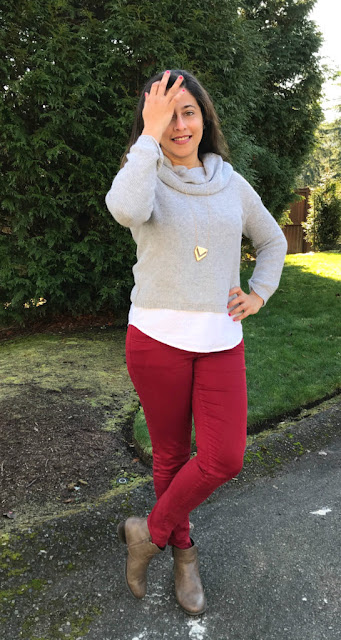 
I feel there is nothing wrong in staying single or choosing career over love or getting divorced or leaving your job and following your passion or having a kid or multiple kids or leaving your job to be a househusband/ housewife/ stay at home mom or dad, move to a different city or anything else for that matter - if you believe it will make you happy and that is what you want out of your life, then that is exactly what you should do. Life is too short to overthink. The only rule one must follow is - no whining! Make a decision and stick by it. Don't blame or curse the world, or stars and planets if your decisions do not work out. How the next person decides to lead their life should not influence anyone to make that same decision. Do what is right for you, the only thing that matters at the end of the day is happiness and mental peace. 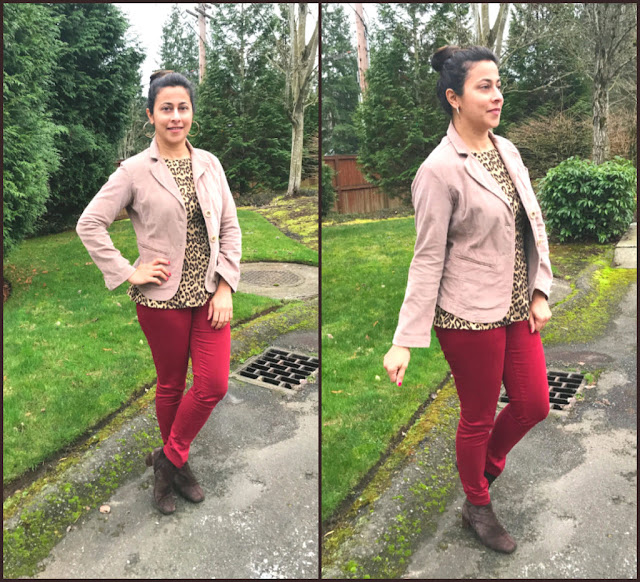 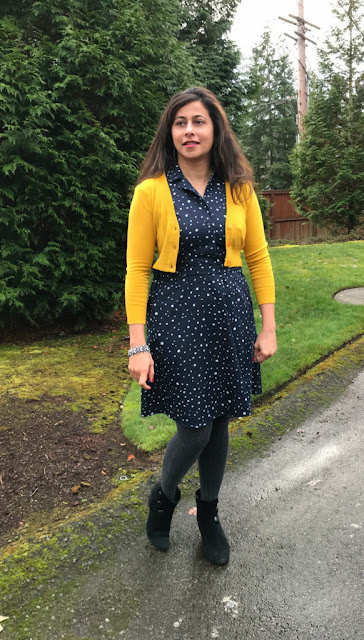 Do you ever feel homesick? The feeling is quite traumatic, I get a heavy heart as if my chest is not able to contain the heart within. Then I get engulfed in the turbulence of thoughts... Yes, I am homesick...

I miss those days which cannot possibly come back.

But that doesn't stop me from wanting them back.

that we shared the common classroom, and nothing else.

Or where having common interests meant we were going to be best friends forever.

I miss those carefree days of college and the days when everyone elder to me doted upon me for absolutely no reason.

Today is one such day when I am homesick and past-sick. 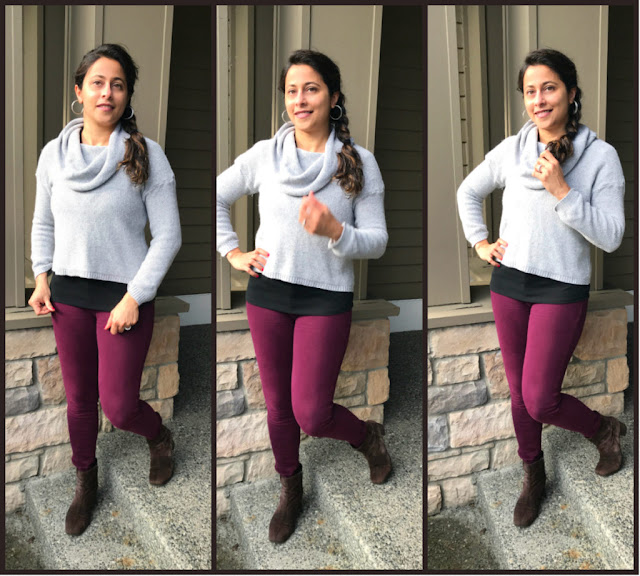 Is 'patriotism' a byproduct of all the wars and battles which had been fought by tribes, clans, cults, religious groups to survive? Is it soon becoming an obsolete emotion? Because this generation is born and brought up in comparatively calmer surroundings (than the world wars and British Raj) and also this generation lives all over the place. We are born in one country, a study in another, work in the third country and then retire in a new country altogether. So which country are we going to be 'patriotic' about? And I do not mean for a sports game, I mean in the time of war.

Is 'patriotism' one of the hurdles in the path to world peace? If there was no patriotism, but only general regard and respect for mankind, no matter where they were born or bred, wouldn't the need to own, capture, secure and protect a manmade boundary disappear? It is wonderful to be proud of one's heritage but if that converts into thinking that we are superior to the other cultures, then it is not really a noble concept.

From what we know Earth could be the only planet with life ... found anywhere nearby or probably found anywhere in the billions of galaxies, it would be great if we are patriotic for the Earth in its entirety and save its environment, life, and beauty! 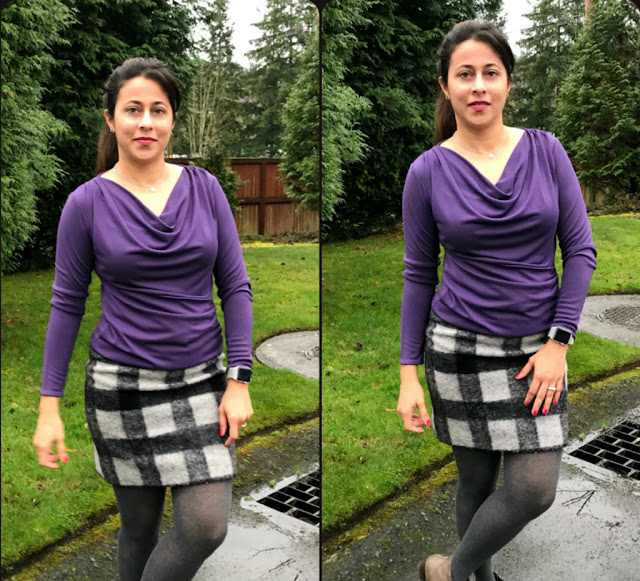 Skirt: Banana republic, Top: Macys, Tights: DSW, Shoes: Don't remember, but I should have worn something else.
Posted by Rasika Mahabal at 4:38 PM No comments: 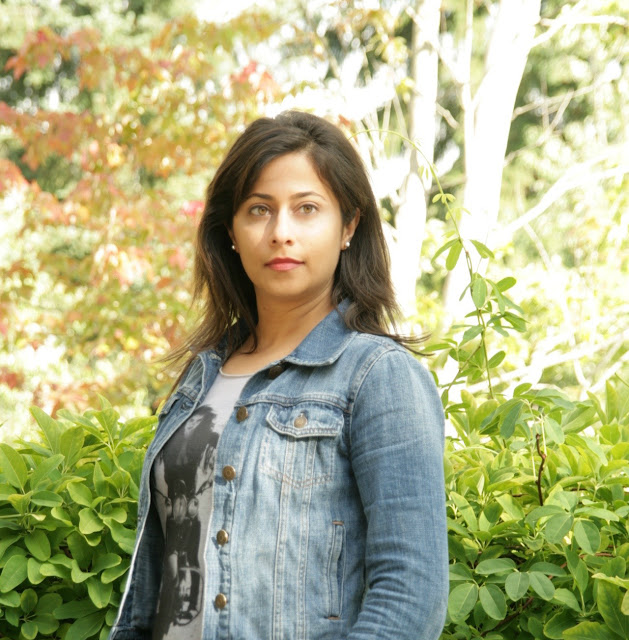